A fairly regular visit to the Feed Bristol site, I heard rumours that someone was starting to grow mushrooms there. I soon met Patrick and eventually, months later, got round to arranging a visit up to find out more about how and why he grows his mushrooms.

It’s a beautiful spring morning when I arrive. Patrick is busy stoking a fire under a couple of oil drums. “Essentially, it’s a very low tech pasteuriser,” he explains, rubbing his eyes and ducking away from the wood smoke. “I’m boiling water in the drums, then I load the straw in these baskets,”  he says, showing me some metal cages. He then points out the winch structure overhead, explaining, “The straw gets so saturated and heavy you can’t lift it, so I need this to get it out again!” Another cloud of smoke comes our way. “The idea is that all of this will be cobbed in so it’s insulated and controls the smoke a bit,” he says with a good natured smile. 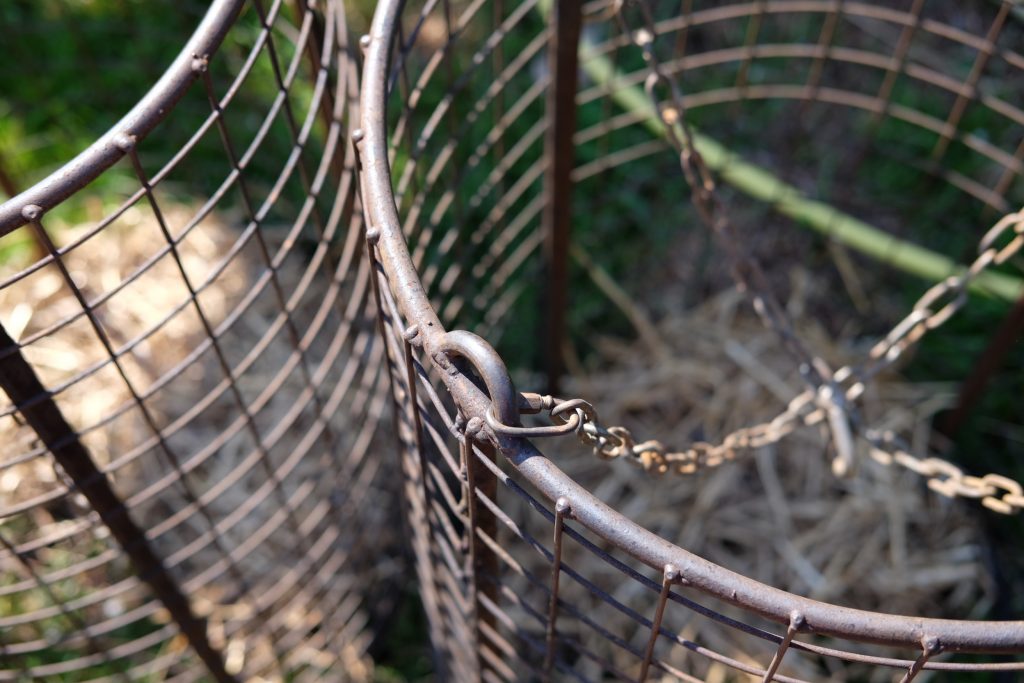 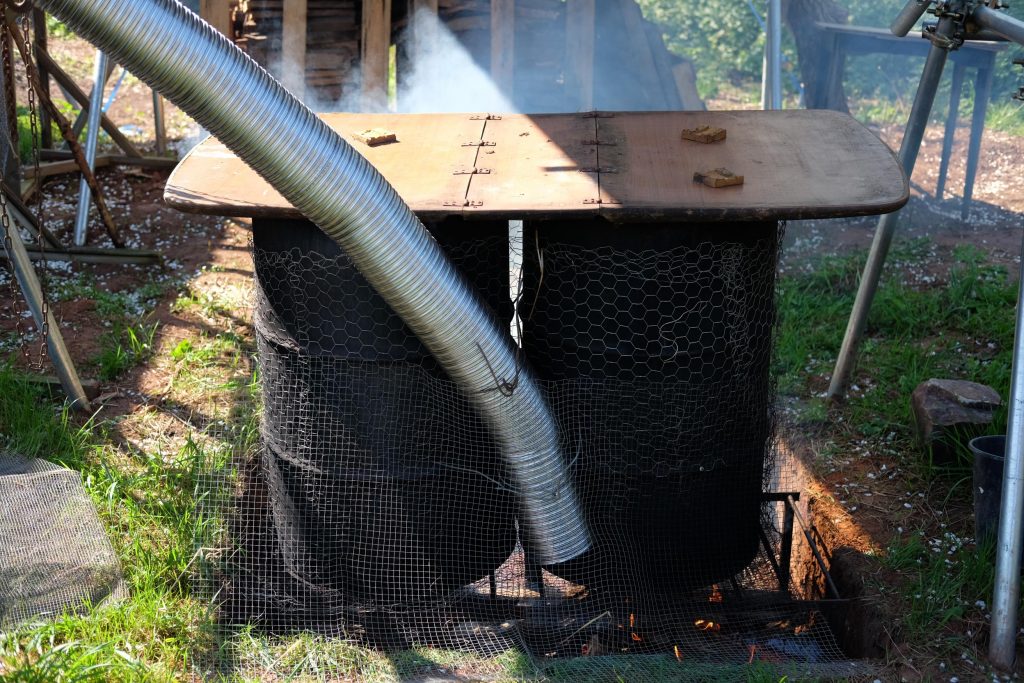 Patrick got into growing food as a teenager. “My nan had a greenhouse and was really into growing,” he tells me. “I had a go at growing mushrooms when I was 19 or 20. I failed epically like everyone does,” he points out, laughing; “But for some reason I stuck with it rather than giving up. It was just a hobby for 5 or 6 years, then about 5 years ago I decided I’d like to do it as my job.” He spent the next four years saving money and buying equipment, and his business, Upcycled Mushrooms is now up and running. He’s one of four different enterprises (including Sims Hill) running on the Feed Bristol site. “I did a year or so of volunteering up here,” he explains. “Through speaking to Matt and trying to find somewhere to set it up, I got offered the opportunity to do it here and become one of the small businesses on the site. It’s amazing and feels really complimentary to the other businesses here.”

He grows a variety of edible mushrooms across the site. Indoors he focuses on oyster mushrooms and lion’s mane, and we set off towards the polytunnels to see his set up, winding our way through the paths on the Feed Bristol site. “I grow different ones depending on the time of the year,” he explains. “Over the winter I’ve been growing grey oysters, but they don’t like hot temperatures so in the summer I move into pink and yellow oysters. It means that I don’t have to spend loads of energy or money trying to heat or cool a room to the right temperature for something to grow; instead just grow something that likes it at that temperature at that time of the year.” Sounds like a good plan to me. He’s made efficient use of the space under the growing benches in the polytunnels ; big plastic boxes full of substrate sit under one bench, shortly to have oyster mushrooms growing out of them. On the other side, he has bags of substrate; some have young lion’s mane mushrooms starting to grow, others have shiitakes peaking through. “The oyster mushrooms are ready in 8-9 days,” he points out. “You can literally look at them before you leave in the evening, and then again in the morning and notice the growth.” The lion’s mane take a little longer, with the fruiting body taking around 14-15 days to reach sellable size. 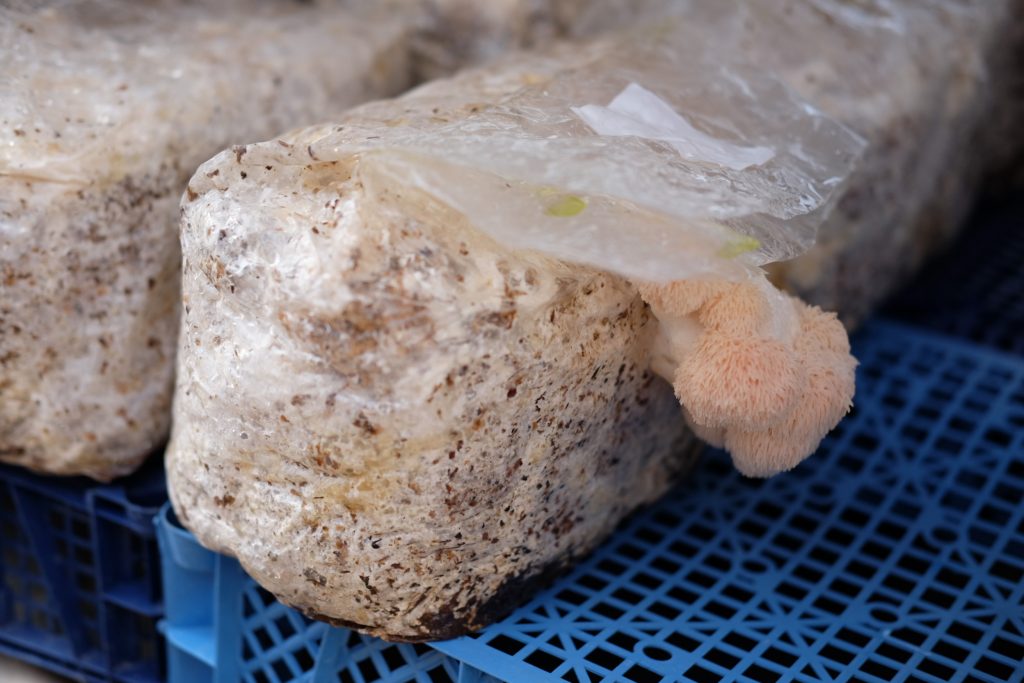 The oyster are a familiar sight with their trumpet shape and long gills. The lion’s mane on the other hand look completely baffling; cream in colour and made up of thousands of long tiny spines. I ask about the flavour. “They have a high protein count and are very tender; great for people who are looking to cut down their meat consumption but still want that meaty quality for a meal.” 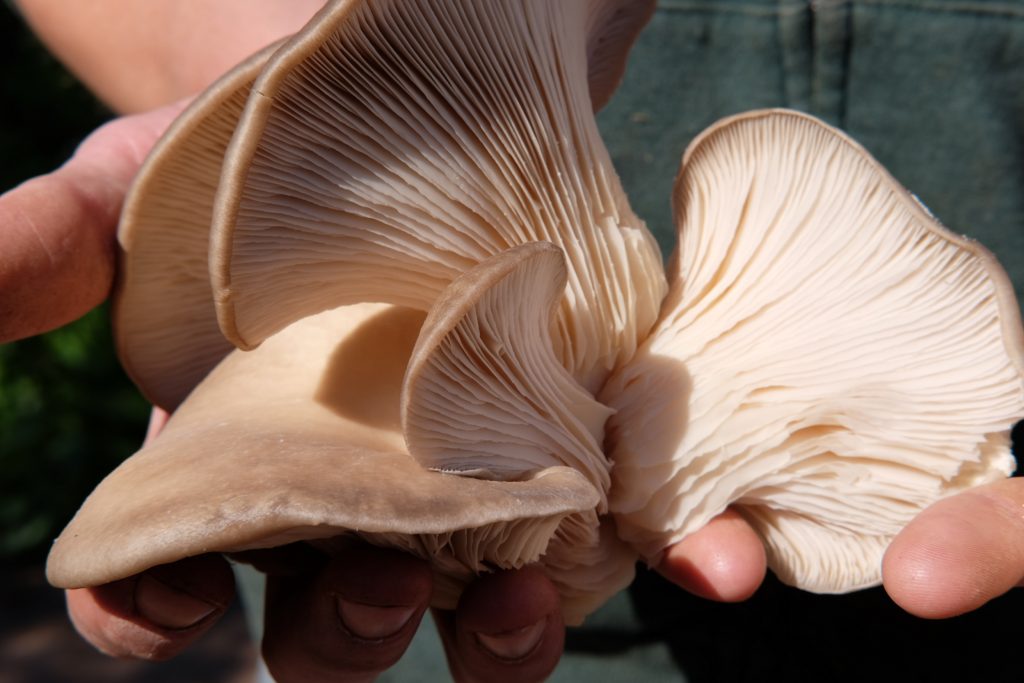 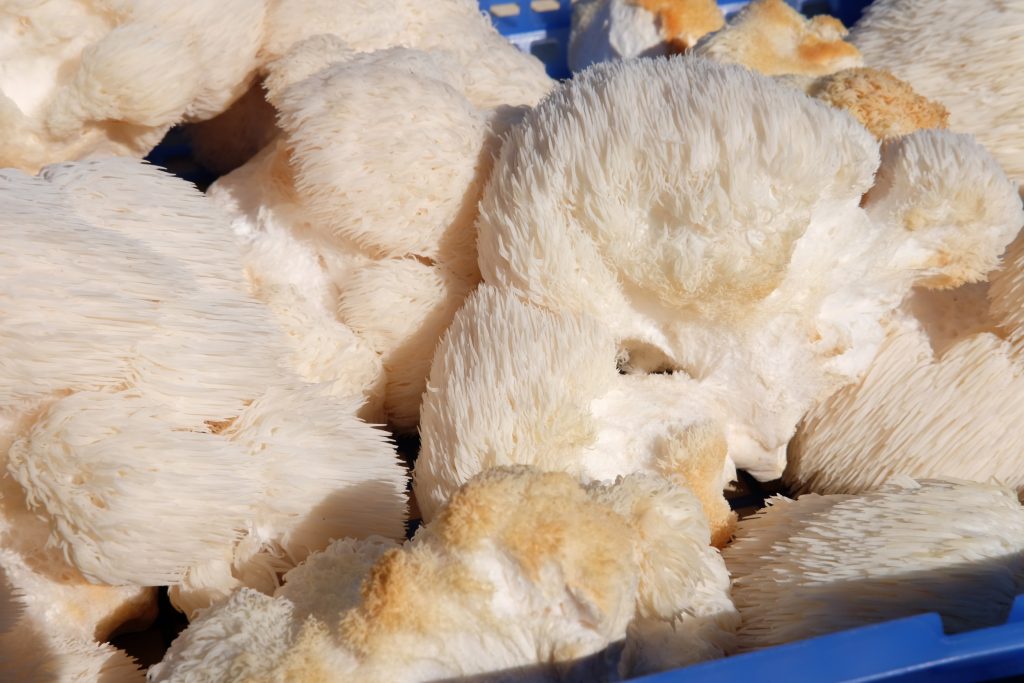 As we continue walking around the site, we talk about his market. “I’ve started selling to a few restaurants around the city,” he begins. We talk names, and I’m delighted to hear Poco and Flow on the list. “It’s quite small scale at the moment but I’m hoping to up it once I get more space and get more established,” he points out. It’s a challenging operation, with everything done by hand. “I sell to restaurants because I have to ask a certain price for them because of the work involved,” he explains. “It’s tough to get people to realise what it takes to have local food, and understand the different between industrially grown mushrooms and ecologically or sustainably grown mushrooms. There’s such a difference between the two, both in terms of flavour but also nutrition.”

We find ourselves by his wood chip bed; it’s yet to start fruiting yet this year, so at the moment it looks just like a bed of wood chips with some young trees planned in it. “This bed was built last spring; it did fruit last autumn but it wasn’t fully colonised then,” he explains. With a bit of luck it should be bursting into life in the next few weeks and he’s hoping for 2-3kg of wine cap mushrooms a week from it. The wood chip bed can form a complimentary relationship with whatever is planted in it, as the mushrooms eat the wood chips and turn them into soil and nutrients, providing food for the trees and bushes. “We’re growing alder on it, which in five years, on a coppice rotation, will become wood chip again,” he explains, but points out it’s also an ideal set up for fruit trees or bushes. 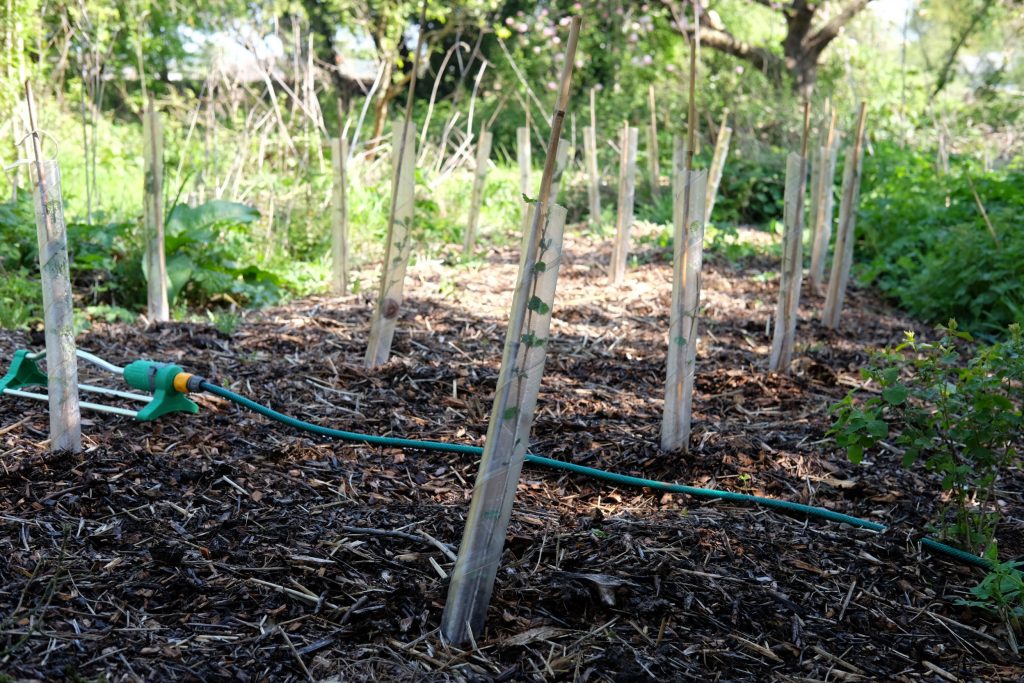 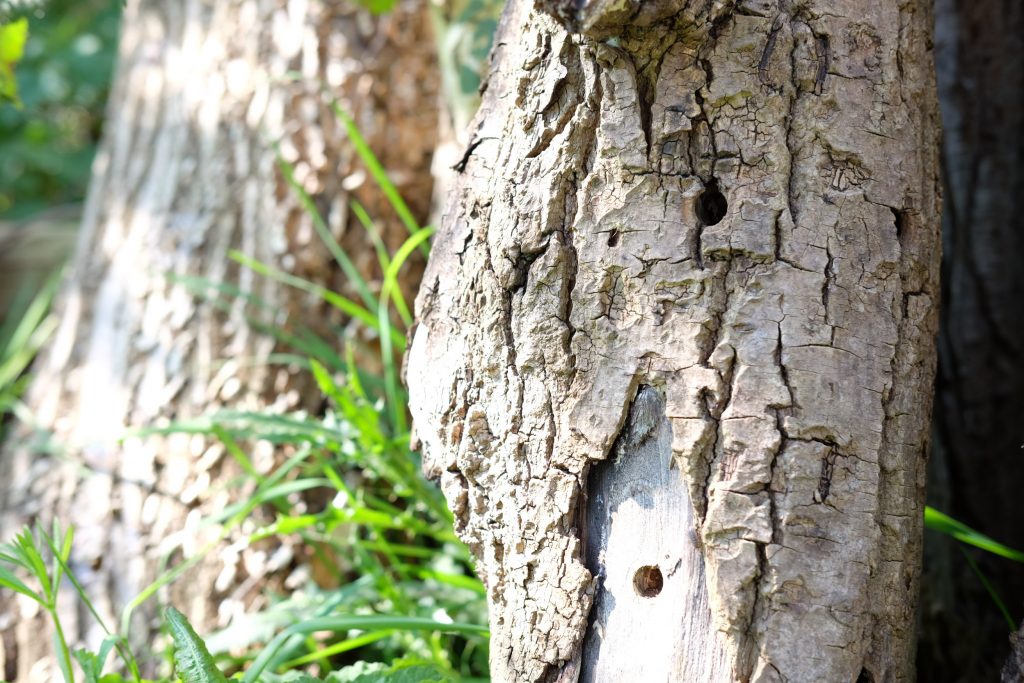 His tour continues, and I soon find myself looking at a pile of logs. Looking closer, I notice a series of holes in each log. “You drill holes into the logs, push the spawn into the hole and seal them up,” Patrick tells me. He pauses. “Then you wait a year!” He points out that while it takes a long time to establish, it will fruit for up to four years. “Once you get it going, you do a yearly rotation, replacing the old with the new.” He’s got logs growing shiitake, chicken of the woods and maitake mushrooms, but isn’t concentrating on the logs because of the amount of storage space required. He’s also started growing reishi mushrooms, a type of medicinal mushroom that is known in Chinese medicine for its immune boosting properties. They are the slowest growing of all the mushrooms he grows, taking 3 months or so to reach size.

We pause for a minute to talk about the wood he uses. He points to the closest logs; “This is poplar, which was rescued after the road protests. Some species are quite specific about what they want to grow onto – shiitake is an oak specialist, but oyster for example will go for most hard woods.” Some woods aren’t suitable, such as conifers which have a natural fungicide in the resin of the wood, which inhibits the growth of most mushrooms. Tree surgeons drop off their logs and chippings at the Feed Bristol site, Patrick takes anything that can be grown on, and the rest is turned into mulch or used on paths elsewhere on the site.

Standing in the shade of some blossom filled apple trees, conversation turns to the wonders of fungi. “I got really intrigued by them, and the more I’ve read and learnt, the more I realise how critically important they are to the entire ecosystem,” Patrick muses. “They’re the ones doing all the recycling, they create soil, they live inside plants…. They’re very very weird and slightly magical things!” he points out with a grin.

The tour ends where the process begins; the lab. It’s a hand-made set up, full of crates of jars, equipment and bottles, and an intriguing box set up with glove inserts (presumably a low-cost clean room). “This is where I clean cultures out,” he explains. “If I’m taking a mushroom I’ve found in the wild, I have to run it through a series of petri dishes on agar until I clean the culture out. And once I have a sterile culture, I then bring it onto a mid-range substrate such as rye grain or sawdust.” He shows me a jar full of grain, the top two inches fuzzy with mycelium. From there, he transfers it to a bigger food source; in the case of the outdoor beds, the wood chip. For his indoor growing, he uses either wood chips, sawdust (from a local furniture maker) or a mix of straw and coffee grounds. “Some of the substrate for my oyster mushrooms comes from Extract Coffee roasters next to the M32; so I’m taking their waste stream and converting it back into food again!” 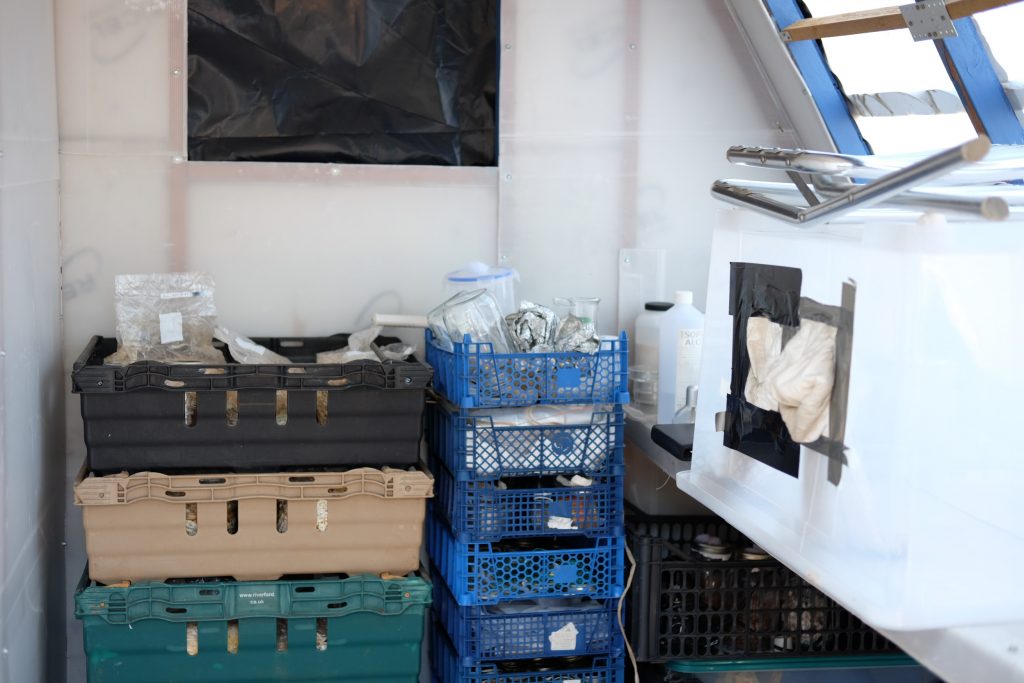 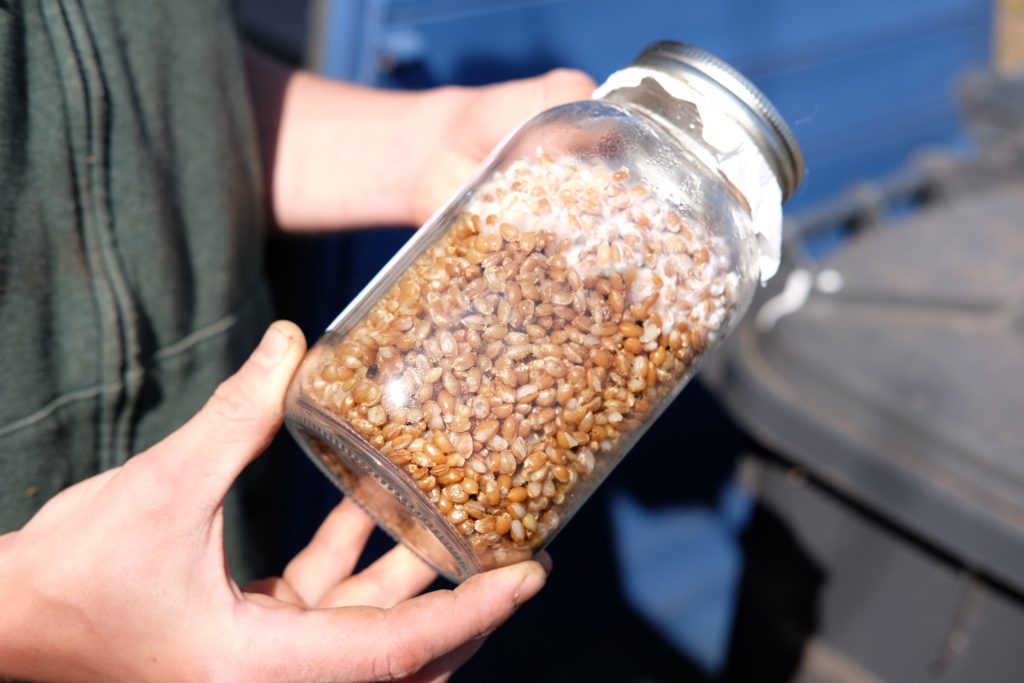 As I pack up my camera, we talk about how his love of fungi extends beyond just growing. He’s teamed up with another mushroom lover, Rich, to run courses. “We’ve written a three day workshop, and that’s been running for a few years now. It combines ecological growing and basic identification- if you’re doing outdoor stuff, there are risks involved with other weed fungi getting into the beds, so it’s important to know what you’re looking at if you’re going to eat them.”

As I cycle home, I get the feeling it’s going to be an exciting year for local mushrooms in Bristol. 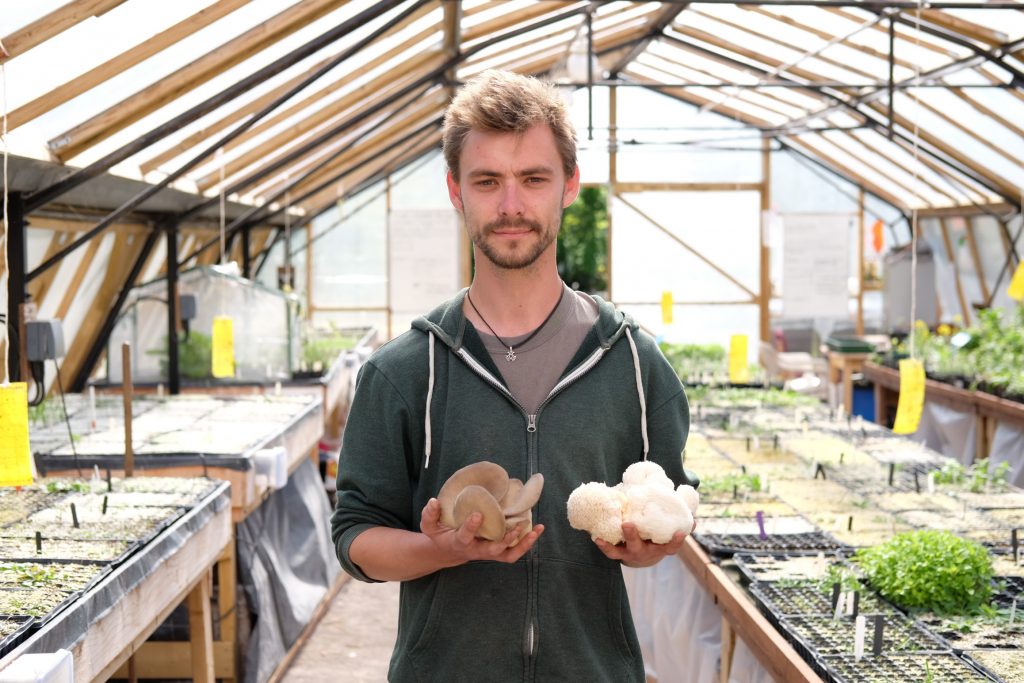 @ediblebristol are a community based organisation

1 in 8 households in Hartcliffe experience severe