Every week, I walk down the end of my road, unlock a padlock and open the doors to a small shed. I weigh out each vegetable on a set of scales according to instructions written on a sheet stuck to the shed door, and walk home, armed with a weeks worth of fresh, seasonal, locally grown produce.

One of the first things I did after returning to Bristol was to sign up as a member with Sims Hill Shared Harvest, a Community Supported Agriculture (CSA) project located along the edge of the M32 motorway. After 10 months of eating their delicious vegetables I decided a proper visit was in order. 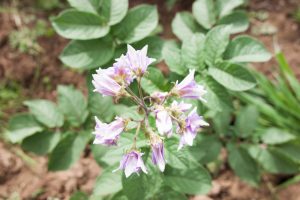 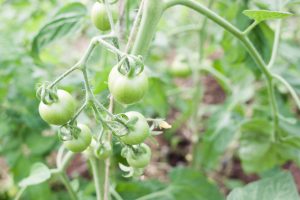 The cycle from my house to the site is beautiful; a meandering 2.5 mile route that follows along the banks of the Frome river. As a result, I arrive at the Feed Bristol site with a big smile on my face but a little warm in the summer heat. Miriam, the farm manager, makes me a cup of tea and we sit down in the kitchen for a chat about the future and history of Sims Hill.

Beginning back in 2008 with a conversation between growers looking for land and some keen community members, Sims Hill came into being in 2010 when the council made available a 6 acre field on some Grade 1 agricultural land along the edge of the M32. The focus was on a community purpose for the land, and so a CSA was formed. 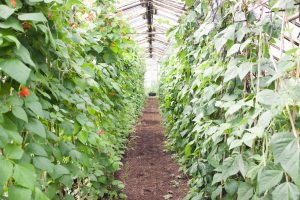 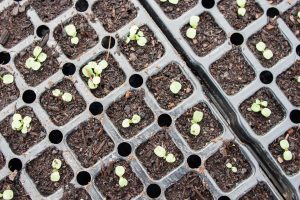 CSA schemes are based around a shared risk and shared harvest approach. “The basic idea is that we aren’t just producing local food,” Miriam explains. “You’re building an organisation where the members feel responsible and connect to the piece of land where the food comes from. We are run as a cooperative, so the members actually can come in and be part of the board meetings and groups, so the power comes from the members.” The clue is in the name really: it’s called Shared Harvest, and you support the farm through the season; the highs and the lows.

You’re also committing to what the farm produces; unlike most veg box schemes where you can opt in/out on a weekly basis, with a CSA you are usually committed for at least a month (the case with Sims Hill, though some farms ask you to commit for an entire season). The bonus is that you get a highly seasonal share; during the winter, I get 7 different things each week, and sometimes more in summer. The last few months has bought a bounty of runner and french beans, courgettes, peppers, tomatoes, corn, potatoes, onions, carrots, beetroot, lettuce, chard, kale, and oh so much more onto my plate, and I relish the challenge of the not knowing what each week will bring.

Miriam joined as the farm manager earlier this year and works four days a week, alongside two part time growers. As well as a monthly member workday, they also have worker shares; “They’re members who work for their share of vegetables each week,” Miriam explains, and they currently have 8 worker shares with room for a few more. We talk about the size of the operation for a while. “Right now, we have about 90 members; to grow vegetables all year round for 90 families is at quite a scale!” And the year round element is definitely the challenge; the winter and spring months can be challenging, especially the so called ‘hungry gap’ which spans from April till June. Sims Hill have chosen to be transparent about the provenance of the food and tell their members when they have to supplement with bought in produce. “When I started putting up the information about where the food we buy in comes from, we lost a couple of members,” she tells me. “But it’s just the hungry gap. It’s difficult!” 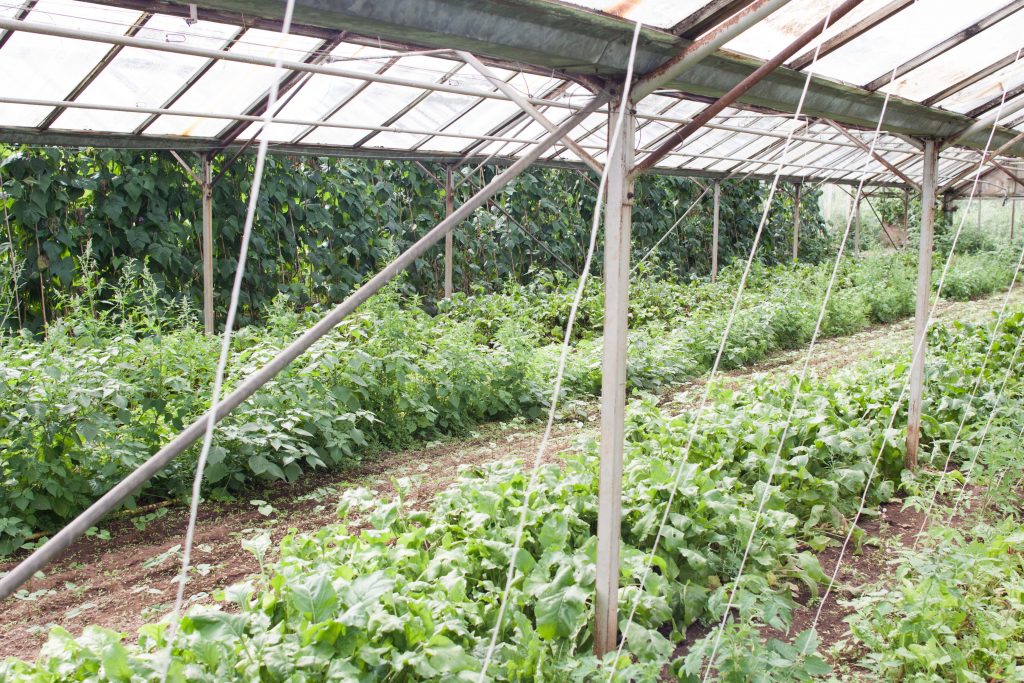 Another challenge is the fact they don’t have their own tractor, so at the moment, much of the work they do is by hand. “With hoeing by hand it just takes ages; by the time you’re through everything you have to start again at the beginning,” she tells me, a knowing smile on her face. “We’re not able to use the field efficiently because we don’t have the machinery. Our neighbour lends us a tractor, but we don’t have all the implements we need.” They’re in the midst of planning a crowdfunded to try and purchase their own tractor and implements, which will enable them to cultivate the field much more efficiently, especially for the next couple of years while they get the weeds under control.

I top up my tea and ask Miriam how she got into farming. “My grandparents come from the countryside and I grew up in Berlin,” she begins. “They always had vegetables in their garden, made their own jam, and I was fascinated by it as a bit of a survival skill.” Inspired by this, she started growing food when she was 19. “I wanted to go to Ireland, and ended up living in a Camphill community (a Steiner based community for people with learning difficulties). They are a therapeutic community, and they have biodynamic gardens and farmland, usually based around self sufficiency. So I worked there in the garden and quite liked it, so after that I decided I wanted to grow food.” After wwoofing for a while in Sweden, she did a biodynamic apprenticeship near the Forest of Dean. After working in Herefordshire for a number of years, she returned to the Forest of Dean to run the gardens there for the last six years. She started at Sims Hill earlier this year, and in her own words; “I feel like i’m in heaven; I’ve been given all this land to grow vegetables on!”

Sims Hill also differs from most veg boxes in its delivery approach. Rather than offering a home delivery service, you collect from a neighbourhood collection point, which helps keep the cost and the environmental impact of deliveries down. “We’ve got pickup points all over Bristol. We’ve just opened a new one in Fishponds. Then we have Windmill Hill, Easton, Harvest on Gloc Rd, Stapleton/Frenchay, St Werburghs.”

We take a stroll around the site. As well as the field alongside the M32, they also grow on just under an acre of land on the Feed Bristol site. An education and biodiversity project run by the Avon Wildlife Trust, Feed Bristol is a haven for wildlife, with wildflowers and insects galore. The Sims Hill area is nestled at the back corner, and we check out the small field with courgettes about to burst forth and unleash their bounty on the members, and long trellises of beans in vibrant flower. The land has its challenges; Miriam points out an area of recently turned soil. “This side is full of horsetail,” she points out with a grimace, indicating the patch she’s spent the morning digging out. We walk through the greenhouse, a beautiful but slightly precarious wood and glass structure that spans a chunk of the land. Inside rows of tomatoes sit alongside greens and more beans. The purple beans are ready for picking and the tomatoes aren’t far away, and I get excited when I realise that’s what’ll be arriving in my share in a few days. 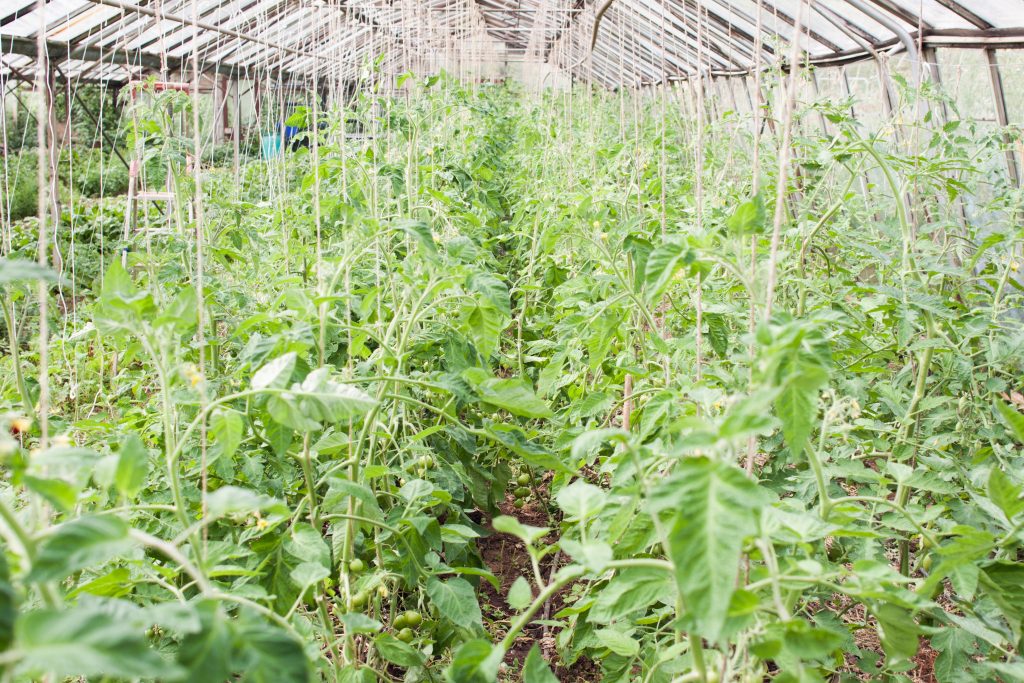 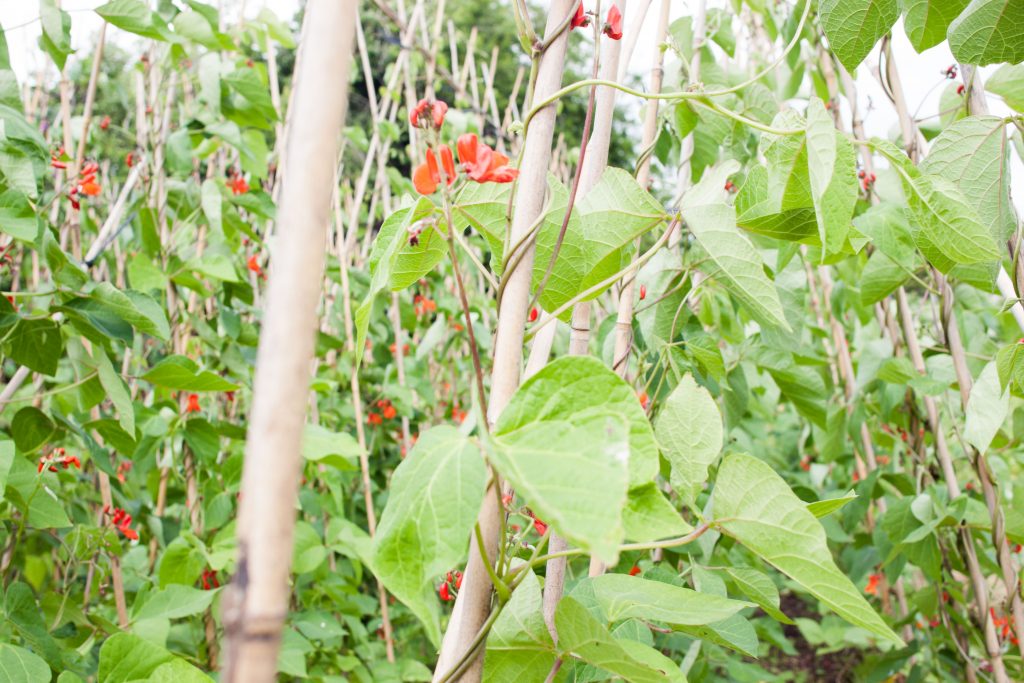 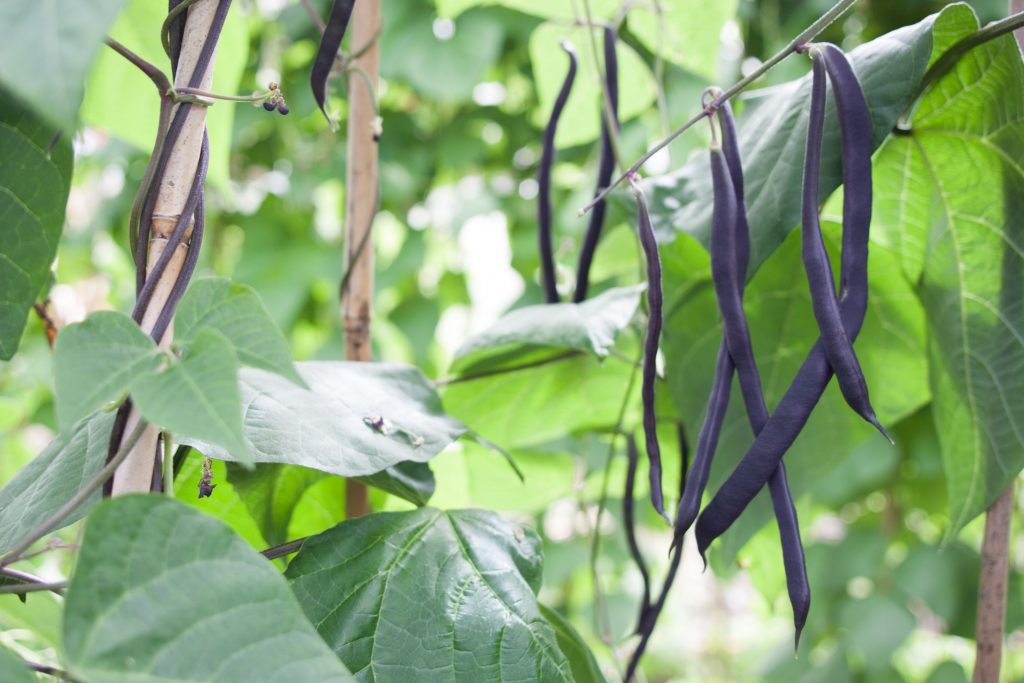 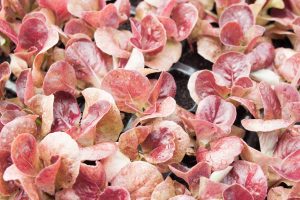 We take a detour to look at the seedlings and starts in one of the hoop houses, and I admire the tiny lettuces as Miriam hunts for a slug that’s been munching on one of the trays. “It’s going to take another couple of years to develop the growing and sort out thing like the greenhouse,” Miriam admits as she peers under trays for the offender. “I’d like to get a lot more members because I think there’s a lot of potential for a CSA in Bristol. And I’d like to build up a good team and make it more accessible for the members; do a lot more open days.” As we walk back to the entrance, we talk about the two projects they’ve got in the pipeline; one is an educational project with children and the other around food aid. “I find that very interesting because I studied social therapeutic horticulture for years,” she tells me, so it seems like she’s in the right place. Her parting words as I leave? “I’m very determined because this is my dream job!” she tells me with a smile.

I leave Miriam to get back to work and head off on my bike to visit the other part of the site; the field on the other side of the motorway. After navigating a very bumpy, rutted and muddy lane, I find myself at the polytunnels. I stick my head inside the two hooped structures, admiring the small peppers growing away and the beautiful salad leaf that’s shooting up. I wonder through the field, enjoying the wildflowers around me, and get distracted by beautiful onion flowers in one of the beds, a leftover from last year’s crop. The potatoes are flourishing, white and purple flowers dominating a huge area of the land.

Sims Hill are a farm on a journey. They may not have it all together yet, but they’re on the way. 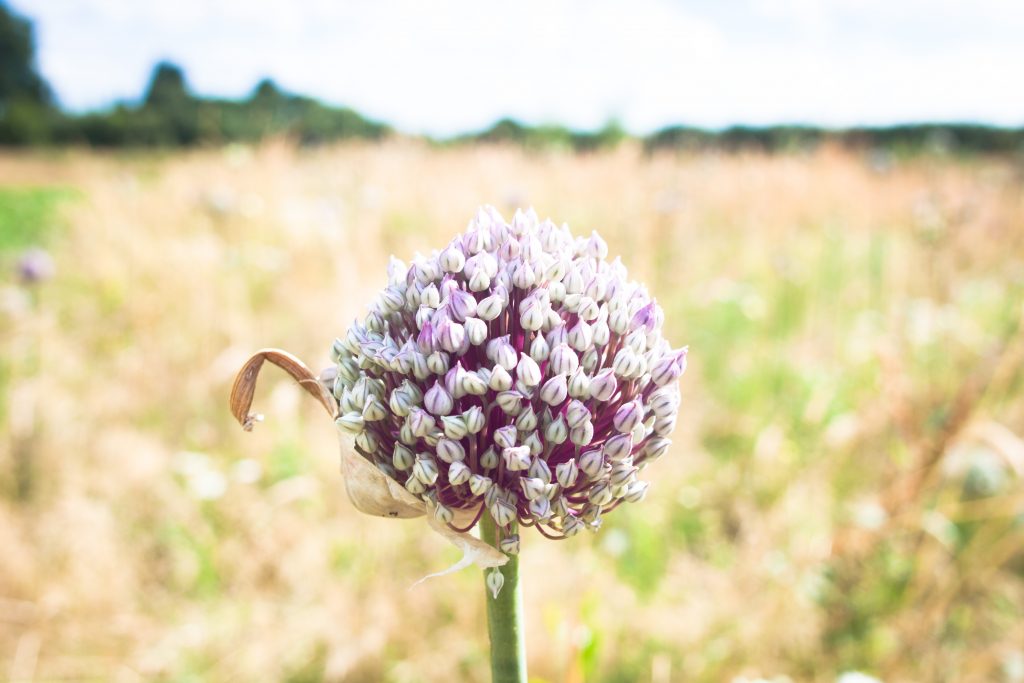 Cooking for wellbeing 🥕🌶️ 🥦 Cooking for wellbeing sessions run at @stwerburghscityfarm weekly on Wednesday and are an opportunity for members of the public to come together to enjoy a communal home-cooked meal and make new connections with the focus being on improving mental health. Attendees get to discover more about how the farm runs and to take a look at the various growing spaces to learn about and taste seasonal vegetables. We do some gentle gardening but the focus is on our shared meal at the end of each session. The food we cook is guided by the attendees and can be inspired by memory, culture or favourite flavours and the time spent sitting together is a time to share our stories and develop meaningful relationships. So far this year we have cooked a variety of things including falafel, soups, bread, stir fry, curry and jerk chicken. We mostly cook vegetarian food but will use the farms produce when available as we believe in a circular system. One participant said; “Before I came here I didn’t really like vegetables, but now I think they are quite tasty. The Cooking Session at the Farm is the only time in the week I eat healthy food.” The course runs for 12 weeks – please fill out a volunteer interest form through our website (www.swcityfarm.co.uk/programmes/adults-volunteering/) if you’d like to find out when spaces become available. ... See MoreSee Less

It really is a surprise to still have flowers like

This week, as part of our @heartofbs13_rms Real Me

It's not only about growing veg and flowers, this